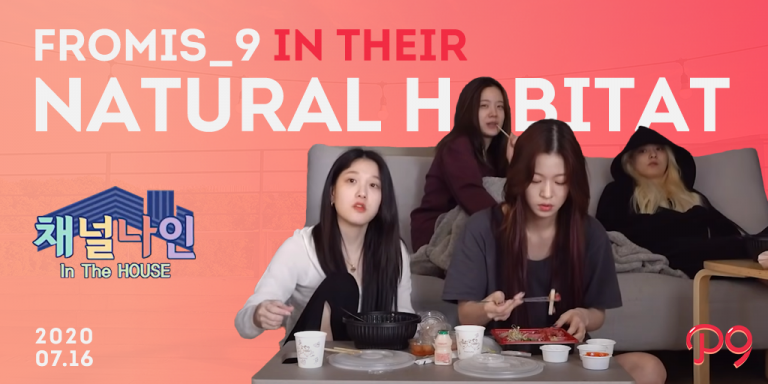 Some extremely natural content. That, right there, is one of the best ways anyone can describe the ‘day in the life’ portion of Channel_9 In the House. Seriously, it’s just fromis_9 at their dorm on their day off with commentary bits spliced in – reality TV show style. No challenges, no MCs, no disruptions. Sounds boring? Well this is fromis_9 we’re talking about, so of course, it’s over two hours of top-tier entertainment.

Overall, the members seem to be fairly individual in the dorm as they all get up at different times, and according to Jiheon, they don’t normally have so many of them stay at the dorm during the day, with no more than three girls at home at a time. In the dorm, the members are divided by their ‘vibe’ into one of three rooms; Sleep-earlyz, Smellyz, and of course Bbiyongz (the first two being named by Chaeyoung).

It’s been over a year since the ‘divorce,’ when – to the shock of flovers – Jisun moved out of her and Gyuri’s room and swapped with Jiheon, who resided on the 2nd floor. Gyul and the maknae are extremely individual and go their own way, seemingly making them perfect for each other. They don’t talk much between themselves and love it when the other is out, which you’d think would be a recipe for disaster, but it works for them!

According to Chaeyoung, the 2nd-floor members are “like aroma salespeople,” as the room always smells like perfume, hence the name ‘Smellyz.’ Captain Saerom insists that the 2nd floor has the most normal people, but they are still a part of fromis_9, so how normal can they really be?

Bbiyongz are loud. What’s more to say? There’s a good reason their room was named even before their debut. As the only room that hasn’t changed since they moved in, they share everything with each other as if they’re close siblings. Apparently they were ‘quiet’ and ‘not hyper’ during the filming even though they were plenty loud, which is weird, and honestly a little scary.

The captain seems to spend most of her day planted at her makeshift office located in between the 2nd-floor closet and mirror. This is exactly what she did on the last ‘day in the life of fromis_9,’ but this time she’s got a laptop, table and a backrest; perfect for her new side job as a professional editor for fromis_9.

The 2nd oldest placed dead last in the race to get out of bed, not emerging from her room until the third episode of this five-part series. She even took a nap after breakfast, but shook off the drowsiness by going to the gym later. Hanyang also sang constantly at random times throughout the day. “When I’m in a good mood, I just start singing,” she said.

Much to Jiheon’s delight, Gyul stayed out of their room, instead deciding to spend the entire day – minus a trip to the gym – in front of the TV watching ‘Love Naggers’ and some of ‘The Invisible Man.’ Perhaps she was studying the acting. After all, she has a supporting role in the drama ‘It’s Okay to Not Be Okay,’ which you can watch on Netflix.

It took a grand total of 77 seconds for Park Megan to yell, but what else would you expect from her? The accusations made by Chaeyoung are true, she really does scream randomly for no reason. She says she’s loud on purpose in order to wake the other members up, but in reality, she’s just an ear-shattering loudspeaker that cannot be silenced. Ever.

Getting out of bed immediately after waking up, the ASMR queen was the first to go to the gym, coming back before some members, like Hayoung, had even started their day. Afterward, she spent her relaxing time in front of the air purifier on the second floor while on her phone watching videos, shopping online, or even scouting out potential ASMR video ideas.

Once again, flovers got a sneak peek of producer Lee Seoyeon, as she spent some of her day not only composing songs, but writing lyrics as well. In the words of Romsae, “She’s our genius composer.” When the lead rapper wasn’t working on songs, she was watching TV where her self-talking habit shined as she became annoyed with the movie, deciding to fast-forward to the end to get it over with.

This variety show prodigy should get an award for storytelling. All the hilarious stories she told during this short series would have anyone laughing and smiling by the end, and the number of times she exposed the other members’ weird habits make her deserve a daesang (the biggest award a Korean artist can get). Even if she wasn’t as hyper as she normally is, Chaeng has the workings of a future master comedian.

Nakko spends most of her day hanging out in her bed, as she’s a bed-body who likes to sleep. She woke up at 11 am on this particular day and was proud of herself for such a feat, and she should be, regardless of what the captain thinks. After taking a nap, she paired up with Chaeng for a glorious photoshoot. While it may have gone off the rails a bit, their visual prowess was still on display for all viewers.

The maknae spends not just this day, but most days at the dorm, in her room, on her bed, on her phone. Even when she’s not on her phone, she’s eating snacks on her bed, and even doing her homework there. The members even nicknamed her ‘watchdog,’ as she’s like a guard dog that protects the house. Maybe one day she’ll take her roommate’s advice and hang out with friends at least once every two weeks.

Not only did this series document a day in the life of fromis_9, it also allowed people to catch a glimpse of how hard the life of a fromis_9 plushie can be. Shibaski was given its first time in the spotlight, and Mr. This had an especially hard day as he was present for each interview. Throughout the series, plushies were hit, thrown, squished, and flattened, much to the sadness of flovers and the editor.

Normally this kind of concept would seem fairly mundane, but thanks to incredibly funny editing and members with amazing personalities, the series was a fun ride that you’d wish wouldn’t end. Here’s to the next season, Channel_9 EfG! New episodes every Tuesday, 9PM KST.