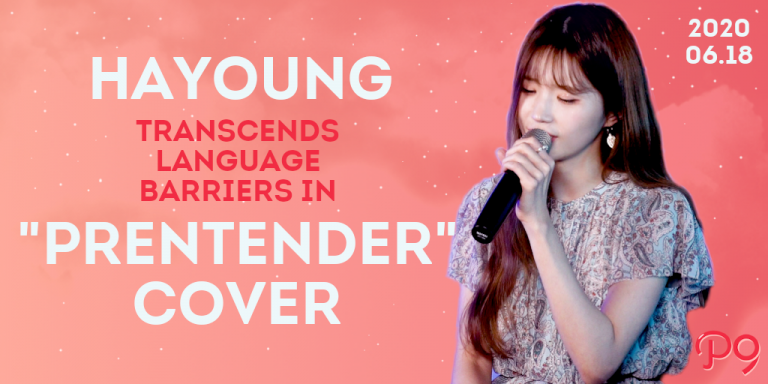 It was an ordinary Monday night in South Korea when a sudden notification popped up on flovers’ phones. Song Hayoung had just uploaded a new flaylist capable of lifting up any Monday blues. While flovers did not expect the wide range of feelings that would sweep through them at the click of a button, Hayoung’s wildest dreams could not tell her that a month later she would be celebrating over 500,000 views on her cover. At least for fromis_9 and flovers, the “ordinary” past 11th of May was quite exceptional.

After a full-group dance performance of 4MINUTE’s “Crazy” in the previous month, it was Hayoung’s turn to release an individual gift. Putting her malbabo (endearingly inarticulate) fame behind, Hayoung decided to show off her language skills on fromis_9’s first-ever Japanese flaylist. The song of choice was “Pretender,” by the four-member J-pop band Official HIGE DANdism, also known as Higedan.

Written as a soundtrack for the Japanese motion picture The Confidence Man JP: The Movie, the song is a certified hit. Achieving nearly 6 million weekly streams in its peak, “Pretender” charted for months on end, figuring in the top 10 of Billboard Japan Hot 100 for 20 weeks.

The success of the song can be largely attributed to its creator, Satoshi Fujihara, Higedan’s vocalist and keyboardist. With an addictive underlying keyboard melody (reminiscent of ‘80s and ‘90s synthesizers), raspy vocals, and even a keyboard solo, “Pretender” is an intense love song that evokes a nostalgic feeling.

Sitting before a starry blue backdrop in a modest long dress and yellow sneakers, Hayoung readied herself to paint Higedan’s biggest success in her own colors. With the support of Jiwon, who came to cheer her on, the fromis_9 lead vocalist concentrated her thoughts on delivering what she described as an “I can’t fall in love with you” emotion.

Hayoung’s opening notes set the pace for the whole cover. Accompanied by nothing but an acoustic guitar played by Hong Hungi, her guitar teacher, it was evident from the very start that Fujihara’s rougher singing and instrumental-heavy rendition would give way to a stripped-down version with crystal clear vocals. Soon enough, the listener is embraced by Song’s voice and brought on a ride where she is the operator.

Hayoung first takes you to a different dimension. Her dreamy tone, complemented by the universe-like aspect of the set, calmly prepares the viewer for what is to come. The lead up to the chorus shows her constraint, perfectly displaying the singer’s control over the piece. At this point, her sweet timbre can easily translate to a shy smile across the listener’s face.

Taking advantage of the audience’s sedated state, she then brings you on a nostalgic trip. Just like the original song, Hayoung’s performance comes tied with a feeling of wistfulness that only the most gifted can convey. For an artist that has the sentimentality-filled “Love Bomb” in her repertoire, she nostalgically interprets a one-sided love song with no trouble. As soon as the chorus hits, the listener surrenders. If it doesn’t make you weep, Hayoung’s crude delivery at the very least converts the once shy smile to an ear to ear beam.

When the song nears its end, it dawns on the listener the singer’s apparent mastery of the foreign language. A quick look at the comment section unveils a wall of Japanese commenters lavishing praise about Hayoung’s portrayal, enunciation, and timbre. Finding fans from the “land of cherry blossoms” going the extra mile to express in Korean how touched they were by her performance was an effortless task. Even easier was seeing those who thanked the skies for YouTube’s algorithm recommending such a stellar cover to them.

It is hard to believe that the girl often teased for her incoherent speech is the same one astonishing foreign audiences in their native tongue. Achieving not only that, but clearly communicating the sentiment of the song even to those who are not familiar with the language is a feat in itself. In a way, Hayoung’s depiction of “Pretender” is a testimony of her own growth.

A Korean girl performing a Japanese song made listeners from all around the world feel all the sorrow, nostalgia, and truth in her voice. With her rendition of “Pretender,” Hayoung proved in less than three minutes that music is indeed a universal language.