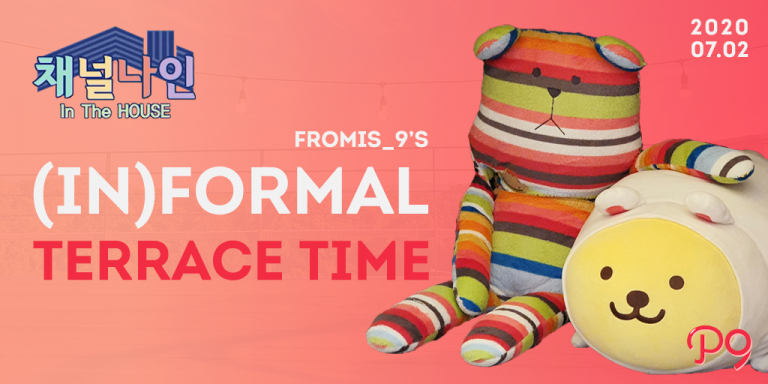 “So, when’s Season 3?” – This was the question in every flover’s mind after the conclusion of the second season of Channel_9, fromis_9’s episodic TV-like series found on their YouTube channel. Their question was finally answered on the 13th of April 2020, when after months of hardships endured by both the group and their fans, a special season titled “Channel_9 In The HOUSE” was announced. A temporary reprieve while flovers patiently wait for the next comeback.

Filmed sometime in March 2020, episodes 1 & 2 adorned a laid back interview concept, with each member paired off with another for a one-on-one talk (with the presence of a special audience). The girls also brought some food to share with their partner, all while the two answered questions written by the other members.

To Seoyeon’s delight, the vice-captain brought a magnificent home-cooked lunch box filled with spam, a fried egg, and some kimchi fried rice. Hayoung correctly predicted all the other members would buy their food and decided to be different after thinking about it all night long. Despite her vice-captain status – which Hayoung briefly forgot about -, she was a hilariously casual MC who sat cross-legged and struggled to follow the script on a couple of occasions, because why act professional while you’re at home?

The non-princess combined with Saerom made for a coincidental, all-salad partnership, as both were on a healthy diet. Gyuri was adorably awkward and sentimental the entire way through, asking heartfelt questions such as “What do you think is really the best about the members?” and “What’s the hardest part about being a captain?” Despite her sky-high embarrassment levels, she still took Saerom’s answers to heart in an attempt to complete her goal of thinking in the captain’s shoes. So heartwarming!

Loud and weird, what else? Park Megan was being nothing but her usual self, much to the annoyance of the maknae who got fed up quite quickly. Jiwon brought bread from a café as she “felt in her heart” she would be paired up with Jiheon and the bread is “round like Jiheon” (what an excuse). Apparently, Jiwon regrets many of the constant funny faces she makes, but it’s a habit, and one she chooses not to break. Never change, Megan!

Originally Jisun was going to bring along a salad but switched to an iced coffee after fearing she would be alone in her healthy choice. During the interview, she was unlike any of the other members, instead acting as a very professional host without a hint of awkwardness, answering her questions simply while keeping a cool head (at least for the most part).

Variety rising star Lee Chaeyoung continued to do what she does best, making people laugh uncontrollably with her hilarious antics. She brought a salad and was coincidentally paired up with Romsae, a fellow salad-eater who actually taught Chaeyoung to enjoy them in the first place. Before, she thought of them as disgusting, but after some coaching, she now finds them delicious. What a great team captain!

The aenergyo queen chose to share ripe mangoes – her favorite fruit – as she was aware of the fact that many of the members were on a diet, demonstrating her thoughtfulness. As she was paired up with Jisun, Nakko seemed awkward in comparison, taken aback by her partner’s professionalism and direct answers such as “I like Nagyung,” even while the atmosphere was on the embarrassing side.

Someone had to be paired up with Jiwon, and unluckily for Jiheon, she drew the short straw. To combat the weirdness, she turned her ‘maknae-on-top’ dial to the max, which was on display at many points. She brought grapes purely because she wanted to eat them; she scolded Jiwon for adding to her Strawberry Series; and even refused to call Jiwon ‘Jiwonie♥’ as she emphasized her belief that contact names should be professional and shouldn’t “cross the line.”

The leader was the only member who was paired up twice, first with the awkward Gyuri and then with the hysterical Chaeyoung, both of which decided to mirror Saerom’s healthy decision of bringing a salad. Saerom tended to conform to her partner, so she ended up showing both her serious and playful side. Her interview with Chaeng consisted mainly of laughter as the two stumbled through the questions along with a hilarious K-drama-like scene towards the end. The other interview however showed a side not usually seen, as she gave her sincere thoughts about being the team captain of the best group in the world, fromis_9.

Despite all of the laughs throughout the interviews, the two episodes ended on quite an emotional note, because of course, the last question would be “What does your partner mean to you?” And if even all those heartfelt answers weren’t enough, Hayoung and Seoyeon included a message to all flovers watching. Just by its first line, “Dear flover that we miss every day,” anyone watching would feel loved and appreciated by our thoughtful girls.